An assortment of personality metrics I’ve collected over the years. I don’t necessarily endorse the validity of any of these beyond the Big Five and the Enneagram—a few are provably invalid—but they’re something of a special interest of mine, and I have always enjoyed seeing the different ways we try to categorise ourselves and others. Incidentally, if you’ve made a comprehensive page similar to this one, I would be interested in seeing it.

My favourite system, and the only one that I think is truly life-transforming if you work to understand it and use it correctly. I've never seen a system implement the motion of how people develop better.

The image above will take you to the ever-famous 16Personalities profile of the INFP, though I like PersonalityMax’s profile a little more. The Myers-Briggs Company now has their own online profile as well, alongside these delightful, if thoroughly vapid, shareables: 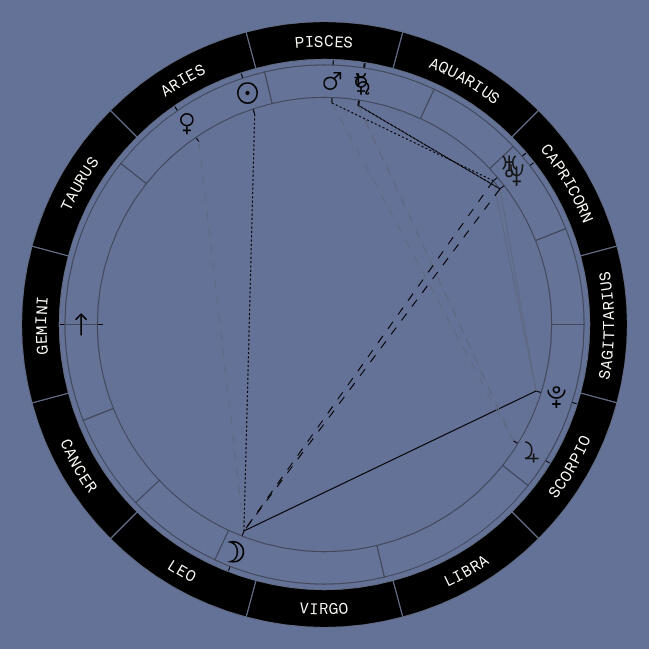 This is just for fun. Astrology is the only entry here that has no validity whatsoever, but it’s both popular and, admittedly, fun in its own “watching a terrible, campy movie and enjoying it despite yourself” kind of way.My Co-Star profile will interpret the above nonsense into its “meaning” for you.

A system based on an expanded Big Five by personality researchers. It manages to be more interesting but less validated, so it comes out about even. To my knowledge, there’s not a more elegant display/summarisation of the HEXACO than just the raw results of the HEXACO-PI-R.

According to the Sociotype.com extended test, I’m an EII-Ne.I prefer not to rely on tests and type myself based on conceptual understanding of a system (as long as there isn't an objective answer, such as astrology, or it’s purely useful as a response to an inventory, such as the Big Five), but the very limited online information regarding Socionics, as well as its relatively unique and incompatible interpretation of the Jungian functions, means that this is the only entry here that I am genuinely unsure of.I also type as IEI with some frequency, and find that I tend to split the difference/relate equally (un)well to both on comparative profiles between the two. I hope to further my understanding of the system at some point, but my general disdain for Jungian systems as a whole and discomfort with the belief in visual identification that many practitioners maintain mean that it has not been a high priority.

The most researched and validated metric, though also the most… uninteresting? It is undoubtedly useful for the academic purposes it was designed for, but it describes a very static image of the you that you were when you took it, with no interpretation or “motion” provided (or even possible). 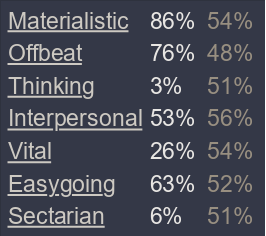 (Lighter text is the average of all answers from others.)MOTIVES is another Big Five-esque system from the SimilarMinds.com team. Currently, no individual profiles, though they do still give a type.MOTIV type: MOHXDEG
MOTIV+: MO|H|xDeG

Primary: Melancholic.
Secondary: Sanguine.
Combination: Melancholy-Sanguine.The last site, Four Temperaments, is trying to charge $75 for a full profile on these. Honestly, I didn’t think I’d find an assessment site run by bigger grifters than the Myers-Briggs Company, but charging that much money for bloodletting-era traits presents a strong contender for the title.